“Round is the blin, yellow gold and hot like the sun, the symbol of sublime days, rich harvests, harmonious marriages and healthy children.”
– Alexander Kuprin.

Blini are inexpensive, light, buckwheat pancakes which have been served in Russia for over 1000 years, eaten most typically during ‘Butter Week’ a feast celebrating the end of winter and beginning of spring.
Russians won’t be celebrating today, however, following their 1-0 Group H defeat by Belgium earlier.

The Sbornaya must be pining for the days of Lev Yashin, a true icon of Russian football. Reckoned to be the greatest goalkeeper of all time, Yashin was known as ‘the Black Spider’ following his performance in a ‘Rest of the World XI’ against England in due to his distinctive all-black outfit, and the assertion that he must have had 8 arms to perform some of the fantastic saves he made that day. Yashin’s greatest World Cup moment came in 1966 where he marshalled the Soviet team to a fourth place finish, losing out 2-1 to West Germany.

“The joy of seeing Yuri Gagarin flying in space is only superseded by the joy of a good penalty save.”
—Lev Yashin

INSTRUCTIONS
Blinis:
1. Place 110ml warm water in a small bowl.
2. Stir in yeast and 2 tablespoons of sugar.
3. Leave to stand in a warm place until the mixture has doubled in volume and is frothing.
4. Stir in half the milk, the rest of the sugar and butter.
5. Add the buckwheat flour stir well for around 10 minutes.
6. Leave to rest for 30 minutes
7. Add the rest of the milk, the plain flour, egg yolks, salt and sour cream and stir until the mix is well blended.
8. Cover and leave for a further hour until the mixture is frothy and has doubled in volume again.
9. Beat the egg whites to a stiff consistency and fold into the blini batter.
10. Coat a frying pan with the butter, and bring to a medium heat.
11. I’m making smaller sized blinis so using around 1tbsp per pancake, but for larger size use around 3tbsp.
12. Fry pancakes- around 1 minute per side, or until golden brown, flipping half way through.
The most famous topping of course is chilled caviar (salmon eggs), and today we are also having smoked salmon, sour cream, and cranberry jelly.

I got the caviar we are having at Fantoosh fish on Great Western Road, which is great for fish if you’re in Glasgow, but a good online alternative I’ve had in the past is Mottra which sells fully sustainable caviar. Best served with sparkling wine, a good option is Tsarine Cuvée Premium Brut Champagne which comes in a bottle inspired by the spirals of St.Basil’s Cathedral in Moscow. If you fancy some you can buy it online from the Champagne Company. 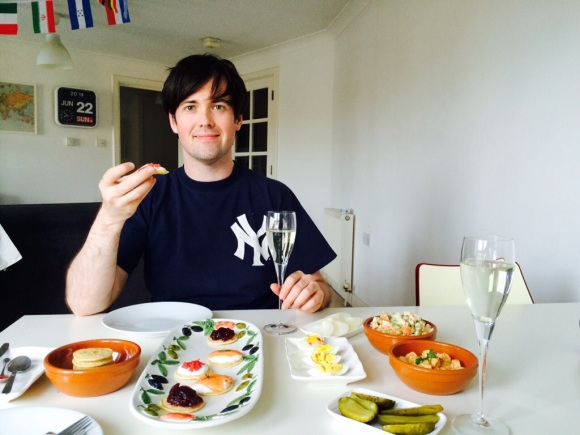